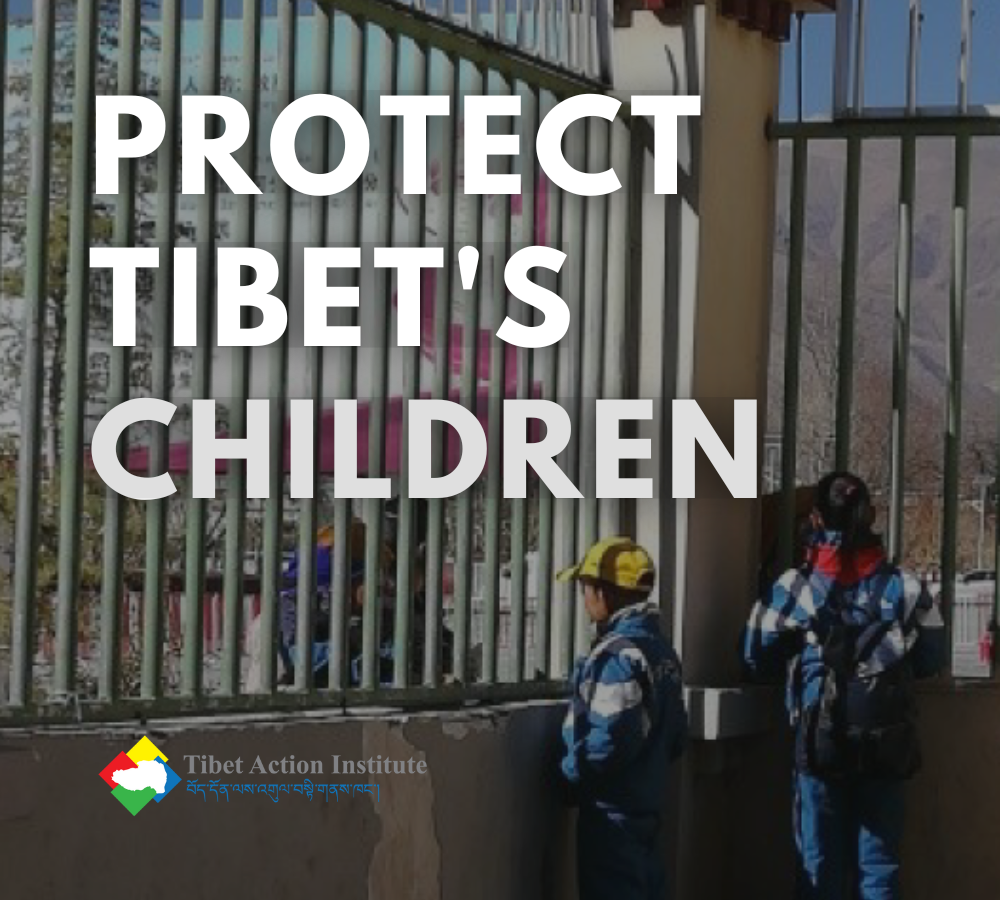 Nearly one million Tibetan children today live in colonial boarding schools and preschools. This includes an estimated 100,000 children aged 4-6 in preschools, and 800,000-900,000 children aged 6-18 in primary and secondary schools. Children live apart from their families, are made to speak Chinese, and are blocked from accessing their own language and culture. Families are coerced into sending their children – both through threats by authorities, and lack of alternatives.

Can you imagine your 4-year old child, grandchild, niece or nephew living at a boarding school, let alone one that is aimed at erasing their identity?

Help us stop them by calling on the G7 countries to take action: https://actions.tibetnetwork.org/en-US/g7-protect-tibet%E2%80%99s-children

Lhadon Tethong testified before the Congressional-Executive Commission on China.

How China forces parents to send their children to colonial boarding schools in Tibet.

How similar are colonial boarding schools to residential school systems in Canada and the United States?

CHILDREN AS YOUNG AS FOUR SEPARATED FROM PARENTS, SUBJECTED TO INDOCTRINATION

Boston — Chinese government policies are forcing three out of every four Tibetan students into a vast network of colonial boarding schools, separating children as young as four from their parents, Tibet Action Institute revealed in a report today. The schools are a cornerstone of Xi Jinping’s campaign to supplant Tibetan identity with a homogenous Chinese identity in order to neutralize potential resistance to Chinese Communist Party (CCP) rule.

The report, “Separated From Their Families, Hidden From the World: China’s Vast System of Colonial Boarding Schools Inside Tibet,” finds that an estimated 800,000 to 900,000 Tibetan students aged six to 18, as well as an unknown number of four and five-year olds, are in these state-run schools. The schools function as sites for remolding children into Chinese nationals loyal to the CCP. Removed from their families and communities, students must study primarily in Chinese, are barred from practicing their religion, and are subjected to political indoctrination.

“By intentionally uprooting Tibetan children from their families and culture and making them live in state-run boarding schools, the Chinese authorities are using one of the most heinous tools of colonization to attack Tibetan identity,” said Lhadon Tethong, Director of Tibet Action Institute. “China’s unprecedented campaign of forced sinicization in Tibet targets even the youngest children and demands the urgent intervention of the United Nations and concerned governments.”

Over the last decade, Chinese authorities have systematically eliminated local schools in Tibet and replaced them with centralized boarding schools, including for elementary-aged children. Monastery schools and other privately-run Tibetan schools have also been forced to close, leaving parents with no choice but to send their children away. In cases where parents try to resist, authorities use threats and intimidation to ensure compliance.

When parents in one village resisted sending their children to boarding school, they were visited multiple times by authorities. At one of these meetings, with police present, they were told: “…If we have to come back tomorrow, it won’t be good.…If you don’t listen [to us] we will squeeze [pressure] you one by one. That is easy for us to do….If you continue to choose not to acknowledge this policy and refuse to send your children to the schools, we will consider this to be a protest.…”

Researchers in Tibet and China have documented serious emotional and psychological harm to Tibetan students living in colonial boarding schools. Restrictions on access to Tibet make first-hand verification of current conditions impossible, but interviews with Tibetans abroad who attended earlier iterations of boarding school in Tibet paint a harrowing picture of children living in poor conditions, subjected to physical and sexual abuse, racism and discrimination, as well as political indoctrination.

The report draws on a range of primary and secondary sources, including first-hand accounts from inside Tibet that describe how China’s education policies affect the lived experience of Tibetans on the ground, statements from Tibetans in exile who are survivors of China’s colonial boarding school system, data collected from official sources, and scholars in Tibet, China and abroad.

​​“China claims to be educating Tibetan children, but the world knows what it looks like when children are pushed into residential schools run by a state that wants to wipe out their culture,” said Tethong. “Beijing must be pressed to respect the right of all Tibetan children to receive a high-quality mother-tongue education without being separated from their families, before any more irreparable harm is done.”